Orit Shaham Gover was appointed chief curator of Beit Hatfutsot two years ago. She is the director of the new core exhibition, slated to open in 2 stages: The Synagogue Hall, scheduled to open in summer 2015  and the new museum in 2017. Orit is well acquainted with the existing core exhibition, ever since the establishment of Beit Hatfutsot in 1978.

Orit held key positions in the young Beit Hatfutsot, and later on in the Palmach museum, the Massada, the Begin museum, the Herzl museum, Acre Prison House, and others.
The new core exhibition marks a new era for Beit Hatfutsot, an era of a pluralistic perception of Jewish peoplehood.
Orit shared some reflections about her exciting work:
Being chief curator
Chief curator of Beit Hatfutsot is the best position any curator can even dream of. I honestly can’t think of any other museum which is as comprehensive, as unique and fascinating as a museum that tells the story of the Jewish People. Ten years ago this was completely out of my scope of ambitions, and here I am. The job allows me to deal with a great variety of realms: history, geography, culture, Judaism and art, and in many aspects of museum work, as well as cinema, visual and interactive arts. It is a mighty task, and I feel very fortunate!
Design and designers
Work relationship between a curator and a designer is like a marriage. It is a great partnership on one hand, and a great deal of finding the right balance between different areas on the other hand. The designer is entirely one of the exhibition’s authors, as the visitor does not divide the experience into separate “curatorship” and “design”, but rather perceives is as a whole. The visitor beholds one space in which content and shape are one. Therefore design is for me a critical thing, both personally and professionally. In some periods I actually spend more time with the designers than with my own family.
Did I mention how fortunate I feel? Well this also refers to the wonderful designers I have the honor to work with – Patrick Gallagher and Cybelle Jonesand their team at G&A. They make a most interesting and diverse group of people, and we have a wonderful interaction. The fact that we’re on both sides of the world makes is difficult sometimes but we have an exciting cultural interaction which covers for it. I find our mutual dialogue very productive. 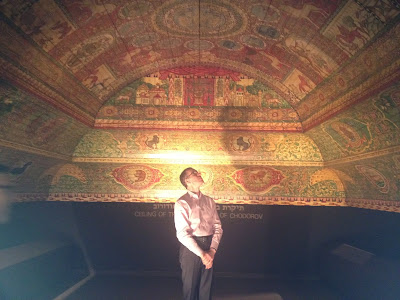 Patrick Gallagher at the current core exhibition
Dreams coming true
My fantasy was raising the visitors’ awareness to one of the most successful revolutions of the 20th century – the revival of the Hebrew language. I also have a personal point of view here: I’m granddaughter of the author Eliezer Steinman, who was one of the Odessa group in the beginning of the 20th century, a follower and protégé of Bialik. He died when I was 17, a young girl, far more interested in young boys than in old grandfathers. My childhood memories however include his back bent on the desk, writing feverishly, never lifting his head to the vain pleasure of the world. This is how I thought of the section called “the writer’s studio”, where we present the humble, severe studios of our great authors while reviving the Hebrew language, devoting their life to this mission, which was even more important for them than their family life.
Another fantasy I’m realizing in the new exhibition: there will be music in the exhibition. Museums are sometimes perceived as holly places, therefore completely silent. However our life is filled with various sounds, including music, which is of course the most beautiful sound. My vision is that wherever possible (where there isn’t a specific sound or film related to the exhibit), there will be music filling the space, either temporal, atmosphere or emotional music. Music is the most abstract art, therefore also the most universal, and it can easily cross cultures, even without interpretation. This will enable visitors to connect to the story not only by intellectual learning, but also by feeling and experiencing emotionally.
Old and New
One of the main differences between the old and new core exhibition will be the display of original materials, rather than just replicas as in the current core exhibition.
My vision is to display not just material culture reflecting a certain time and place, but actually combining works of art into every section of the exhibition. For I believe that art, though presented in other museums in separate exhibitions, is part of our live and part of our story. In the context the new Beit Hatfutsot, art also conveys a temporal atmosphere and it also serves as a mediator between past and present. Works of art will be displayed in the most unlikely spots, stressing that art is always a dialogue with the past, never detached from it. For example, in the entrance to the second floor, the installation “The Invisible Part of the Children of Israel” by Carol Hamoy will be displayed, showing 40 hanged clear plastic dresses. The installation will add an emotional dimension of gender relationship and tension, without having to specify it on the wall.